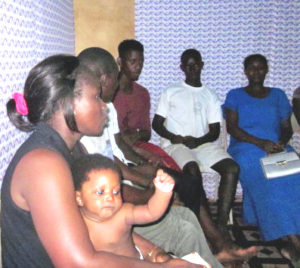 It was a special night for the Fula OneStory team. They had worked together for a year producing a set of Bible stories for the Fula in their language. Fulas in Guinea Bissau, West Africa are almost exclusively Muslim.

The team had invited a group including young, old, women, men, Christians and Muslims to listen one-by-one to the set of stories to discuss them. The team checked if the stories were understandable and were told in good Fula. Some of those gathered had cell phones.

The next day as team members walked the streets near their houses they heard the stories being played! They didn’t realize many had recorded the stories on mobile devices and now were sharing them with family and neighbors.

One team member we’ll call Shehu was once strongly Muslim but converted to Christianity a few years ago. He now pastors a church and has a Fula language program on a local radio station. Even though he presents Christian programing, Muslims tune in thrilled to listen to something in their language.

“Shehu” recorded every story in the OneStory Fula set for high quality distribution and plays them on his radio program. It is a very popular program, and many are listening to God’s love message for the first time and in their mother tongue!

View other content by One Story.    Tags: Radio, Storying

« Understanding the Remaining Mission Task The Dialogue Style of Jesus »