By IMB
Written by Stella McMillian

In West Africa, truck driving is a dangerous and stressful job. Drivers face job insecurity, the threat of being robbed, extortion from corrupt policemen, and cultural and linguistic barriers as they cross through borders taking imports from the coast to landlocked countries farther east. 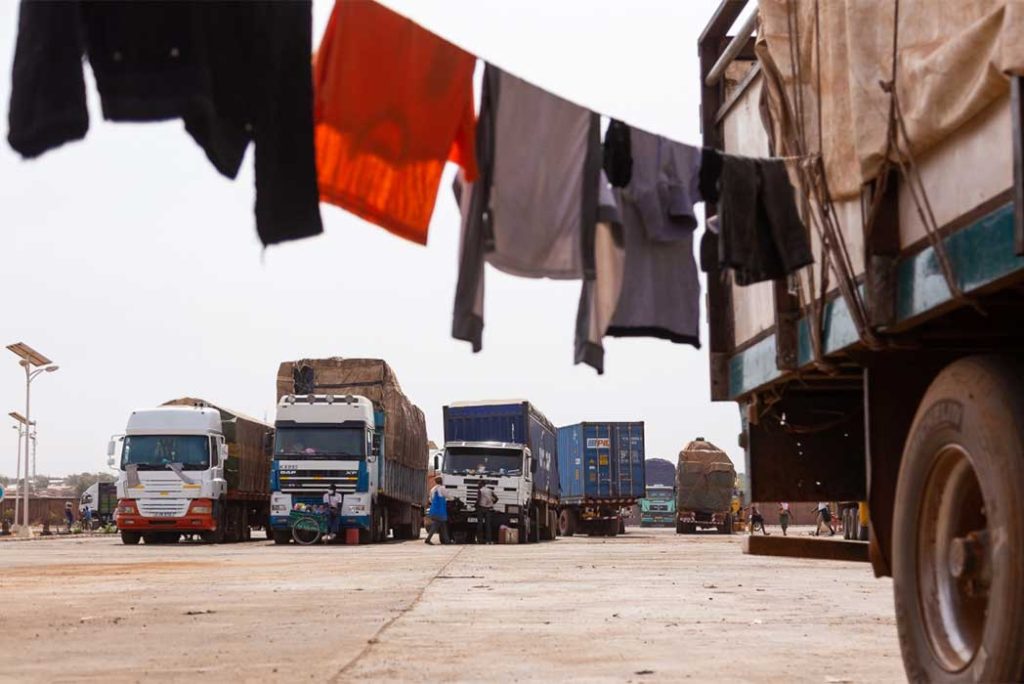 So when Christians offered to pray for Ahmed* one day as he prepared to leave the port and transport his next load, he didn’t mind, even though he was Muslim. As he continued on his route though, he was amazed that the police never harassed him, just as the Christians had prayed for.

The next time he saw the believers at the port a few months later, he gathered a group of his friends and went over to them. The last time, the Christians asked him if he’d listen to a story, but he’d been in a hurry to leave. Now, he wanted to know more.

“God answered their prayer,” he told the whole group. “Now, we’re going to listen to their story.”

Each time Ahmed returned to the port, he found the believers and asked to hear another story. As the months passed, he understood his sin and his need for a Savior, and he put his faith in Christ.

He’s just one of many truck drivers in the last decade who have heard and believed the gospel through a ministry to truckers IMB missionary Katee Sheppard* helped start.

When Sheppard moved to Togo in 1998, her job as a logistics coordinator kept her crisscrossing all over West Africa helping other missionaries with practical needs.

As she traveled throughout the region, she began to notice the drivers, and she realized they were spreading more than just imports. Historically, Islam spread in Africa from Muslim people groups in the east to other people groups in the west through trade routes. As goods were exchanged along the routes, so were cultures.

Today, the trucking routes are modern equivalents of those trade routes. Truck drivers bring their culture with them as they travel, just like the traders did. Sheppard could see evidence of that as she noticed more and more mosques appearing in the cities she knew were truck driving hubs.

The drivers, Sheppard theorized, were a major source of the spread of Islam throughout the region. But, she had a vision to change that.

“I thought, why can’t they spread the gospel instead?” she said.

Over a decade later, that seed of an idea has borne much fruit. Ministry among West African truck drivers has begun in five countries and is still expanding. A network of 70 local believers has formed to support it. New believers have been baptized, and churches have formed in a few ports and capital cities that are trucking hubs.

All of this started with a very simple approach. Truck drivers come to the ports for work, but sometimes, they have to wait days or even weeks for loads. Because of that, the ports really function like small cities. The drivers eat there and congregate together to pass the time. So, Sheppard and some national believers began going to the port in their city and just asking the drivers if they had time to hear a story. 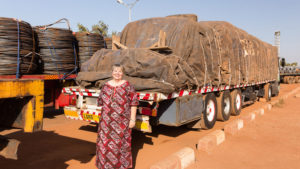 Many African cultures are oral cultures. They have long traditions of passing knowledge from generation to generation through sharing stories with each other. So Bible storying is often the most effective way to help the gospel come alive.

Sheppard said she’s been amazed at the responsiveness from the drivers.

“I don’t think I’ve ever had someone refuse to share a story,” she said. “They’re waiting for someone to come and share with them. It’s an amazing thing.”

Leah Givens*, another IMB missionary who helps with the trucker ministry, said drivers are often just glad someone is taking the time to come talk to them.

“I’m amazed at how hungry they are to hear the word,” Givens said. “It really is a ripe field.”

Because truckers are so transient, discipling those who convert can be challenging. They also might face stiff persecution in their home countries. Over the years, though, a network of national believers has developed to support the ministry.

When drivers are receptive to hearing stories, they’re given a business card with contact numbers of people along the trucking routes they can call to connect with and hear more. These connections become a support system for drivers who trust in Christ. 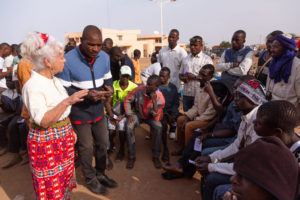 Volunteer Jean Davis shares her testimony through translator Julius Okunade with truckers while they wait to be seen at a free medical clinic put on by IMB missionary Katee Sheppard* for her West Africa trucker ministry.

The involvement of so many national believers in the ministry gave rise to another need. They needed more stories in their toolbox so they could better explain God’s redemptive plan from all across Scripture.

That need has grown into an oral storying training ministry, “Story Together,” that has equipped people from many different language groups in Africa to share the gospel through well-crafted stories. Story Together is led by nationals, just like the trucker ministry.

It began as a grassroots movement to train the men who volunteered with the truckers, and it grew to training leadership in multiple Baptist associations, as well as training pastors and seminary professors. Next came training women from eight different language groups to teach other women throughout their regions.

Though much has changed over the years since Sheppard first began to pray for God to work among West Africa’s truck drivers, her vision remains the same.

“My dream from the beginning was, and still is, that West African truck drivers will carry the gospel to the ends of this part of the world,” she said.

“It’s God’s Word that changes people and nothing else.”

« Transformed Lives A word from the International Director (July 2020) »