Missionaries use trading pins as bridge to gospel conversations

With international spectators and Japanese fans unable to attend the Olympics or be in the vicinity of venues, pin trading has not made much of an appearance, except, that is, for IMB missionaries, who’ve been giving pins they designed to share the gospel to people they meet.

With international spectators and Japanese fans unable to attend the Olympics or be in the vicinity of venues, pin trading has not made much of an appearance, except, that is, for IMB missionaries, who’ve been giving pins they designed to share the gospel to people they meet. Missionary Scott Bradford said they are primarily handing out their bridge pin, but they have others used to open faith conversations. The team distributes a pamphlet that explains each of their pins. If people have time, they share their faith and use the pins to talk about faith, grace and God’s redemption.

Missionaries had longer conversations with many people during a Sunday outreach event in the Akihabara district of Tokyo. Missionaries handed out 24 full sets of pins and 50 bridge pins. 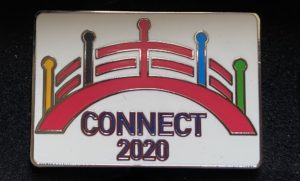 This pin uses the colors of the Olympic rings and the image of a bridge to initiate a gospel conversation and lead into using the other five pins.

Missionary Tara Rice and Journeyman Natalie Nation used the Tokyo bridge pin at an outreach in the Ikekuburo neighborhood to share with Kenta, a physical fitness trainer, who left with more than an Olympic souvenir.

Kenta initially approached the women to practice speaking English and get a free pin. He left with the knowledge that his sin separates him from God, and there is no way to bridge that separation unless he puts his trust in Jesus.

Nation transitioned from talking about his life story into the story of the bridge pin. Without accepting the grace Jesus offers, there is no way to build a bridge back into relationship with God, Nation told Kenta.

“He completely changed his body position from away from us to toward us when we started sharing the gospel. When we got to the part about sin and being forever separated from God without the blood of Jesus, his eyes completely lit up in almost confusion and also intrigue,” Nation said.

Kenta asked if he could go and get his friend so he could also hear how his sin could be absolved.

He plans to attend an outreach event Nation and other missionaries are hosting in a park for Japanese young adults on August 7.

Rice said they also shared with a woman named Hitomi, who offered them candy. When Hitomi discovered Rice speaks Japanese, their conversation deepened.

Rice showed Hitomi the five pins and explained the meaning of each. 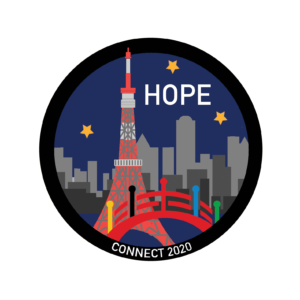 The Tokyo Tower is visible from around the city, and Japanese people see it as a symbol of their country’s post-World War II economic growth. Looking to God gives us hope, and we have the promise that we will thrive in our relationship with Him.

Holding up the hope pin, Rice said, “Our turning away from God left us in darkness … but God made a way for us to be restored.”

Hitomi, who was familiar with some of the tenets of Christianity, exclaimed, “Oh so that’s why this pin is hope!” Rice said she quickly internalized the meaning behind each of the pins.

“The version of Christianity that she had learned was to be a good person and good things will happen to you. And I told her that Jesus actually takes that pressure off of us by taking on the results of our sin,” Rice said.

“We serve Him out of genuine love for Him, and when I told her that, she was so excited by the idea.”

Nation and Rice hope her excitement will lead her to decide to trust in Christ. They also invited her to their outreach event on August 7.

Olympic pin trading has a 122-year history, dating back to the first Olympics in Athens in 1896. Pins are designed by organizations and companies to represent the Olympics, the host city and their organization. People can trade pins with one another, buy them from companies or receive them in exchange for listening to a presentation.

Pin trading is a fundamental part of the Olympics, and pins historically have been used by evangelicals as a method of sharing the gospel.

“Historically, in the Southern Baptist Convention, we have been using pin trading as a gospel bridge,” Daniel Rice said.

“That becomes a bridge for us to talk about the five pins that we have created on love, grace, hope, faith and community that bridge to the gospel booklet that explains each of those pins,” Bradford said.

Each pin features a bridge, which symbolizes the connections that Christians make between the Japanese language, culture, landmarks and the gospel.

« An Afghan pastor’s prayer for his country Behind the Lens: How Bible storying changed Seni...» 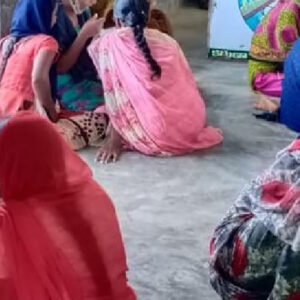