It is a sweltering day on the African Atlantic coast. A searing afternoon sun burns the white sand and a hot wind sifts through the silver waves. There is no shelter as several Peular-speaking women are baptized in the tepid salt water. Afterwards, there is a circle of praise and rejoicing on the shore as they recognize the newness of life represented by their step of faith. Their tentativeness is in the past, and the fear of persecution that has haunted their conversion is overcome. Songs in their mother tongue rise boldly above the ocean roar, a sweet sacrifice to God. And it is hearing stories from God’s Word that has given them the boldness for this new journey. For as members of an oral culture, where print and reading are foreign for 95% of women, the communication of stories orally is their only access to the Word of God in their heart language.

Are women of oral cultures a forgotten majority of the world’s population? It is a fact that women like the Peular sisters of Southern Mauritania constitute a majority of the oral communicators of the world, but where are the materials and training focused on them? And what can happen when such training exists? Will they in fact be encouraged toward faith in Christ like the new believers of Mauritania?

There is a longstanding need for materials designed exclusively for women of the Global South and the Majority Church. This reality is underscored by the readiness with which women of oral cultures embrace a new course called Bridges for Women. The course, developed by Scriptures in Use,1 facilitates a storytelling ministry among women of oral cultures. This chapter features field results and best practices based on the global implementation of Bridges for Women.

Faustine Mbongo has served as a national trainer of Bridges for Women in Francophone West Africa since 2006, when the materials became available in French. Having taught the course in Mali, Niger, Burkina Faso, Chad, and Mauritania, Mbongo also concentrates her efforts in Senegal, training trainers, as well as developing storytellers and mentors.

One windy arid day, Mbongo took me to Babark, a remote Serer village in central Senegal. Here, a beautiful Serer woman sat regally in the humble one-room health clinic in a costume befitting the Queen of Sheba. I was delighted to see women gathered for the weighing of their babies at the baby-wellness clinic. The women brought forward their babies and the crumpled yellow cards that recorded the progress of their infants in weight and height. This gathering place, where women come together monthly, creates natural relationships for storytelling and dialogue.

Women like Oumi Diouf, who weigh the babies and fill out the charts, are also proficient storytellers. Diouf, trained by Mbongo, is a tall, elegant woman who speaks three languages and has mastered more Scripture stories than perhaps any other Senegalese Bible storyteller. She is proficient in Chronological Bible Storytelling as well as in choosing stories that will minister at the right moment to the right women in terms of worldview and individual needs. She is also successful in developing appropriate and engaging dialogue.

Several of the women in the baby-wellness clinic have become believers and some have been trained in a local village training workshop to tell the stories of the Bible in their mother tongue. Diouf is not only a great storyteller, but has become an excellent mentor. Bridges for Women equips the mentor to (1) teach oral learners to memorize new stories, helping her select appropriate stories for the audience; (2) check her telling for complete biblical accuracy; (3) help the storytellers develop the right dialogue questions; and (4) at a later time, listen to the stories again to make sure the accuracy remains intact. Diouf has mastered this role and finally, after serving for three years as storyteller and mentor, she feels confident to be a trainer of trainers, an expert in oral tradition. Mbongo is pleased with her progress. Mbongo has learned her hardest lessons, however, as a lead trainer in Mauritania and Mali, where she is still working hard to identify local trainers. Obstacles to be overcome include the lack of a mother tongue translation (especially of the Old Testament) and the lack of potential in-country trainers. But there is progress. Just recently, she taught her first Bridges for Women course in Niger with excellent results. Some of the women she taught work among Tuareg nomadic families for whom storytelling at the desert night fire or at teatime is an optimal communication tool. Mbongo has already identified several local trainers in Niger.

It is always astounding to see how quickly women from the Majority Church grasp the incredible potential of narrative once the concept is introduced. It is a matter of getting the message out to them since their models of ministry have been expository preaching, literature distribution, analytical Bible study, and so forth. They have not realized that theology can be taught profoundly through narrative examples. Once they do, their enthusiasm is boundless.

Oral cultures respond to stories in powerful ways, finding in the narratives real-life characters who provide concrete examples of good and bad behavior. Stories provide models instead of abstract theory and address human issues with profound clarity and precision. They provide answers both on a theological and a personal level. The message is contained within the body of the narrative. It is not necessary to preach or amplify the story or analyze with exposition. The models of behavior, consequences of behavior, and examples of God’s provision are provided in the stories themselves.

Human issues such as needs, worries, and fears (in addition to worldview and belief systems) are identified in Bridges for Women workshops. The leader’s task is to identify those issues in the lives of the women. Issues are identified according to people group, community, or individual. They then proceed to identify a collection of stories that provide answers to those issues. More than 120 stories of the Bible feature women as main characters. To facilitate story selection by trainers, mentors, and storytellers, the 120 stories are divided into chronological and theme-based collections (e.g., suffering, comfort, wisdom, infertility, motherhood, love, and so forth). In their totality, these narratives depict every human condition, weakness, and strength in the character of women.

Asharphi, a Hindi speaker of Uttar Pradesh, India, is learning to tell Scripture stories accurately. Her teacher, Monica Paul, has emphasized biblical accuracy from the beginning. “Some traditional storytellers or chanters of cultural or religious narrative have been known to change words,” says Paul. “Each time they may say it differently. Their devotees have in turn changed words, and in this way the story is distorted. That must not happen with us, the Scripture storytellers.” Asharphi memorizes whole stories without leaving out or changing a single word.

To safeguard biblical accuracy, stories are painstakingly committed to memory and repeated under mentor supervision until perfect. The story of Ana at a Bridges for Women course in Oaxaca, Mexico, illustrates the process. Her head bobs up and down, her eyes are downcast, her lips move imperceptibly in a constant rhythm with the movement of her head. This continues as she repeats her new story over and over to herself, placing it indelibly into her memory. When she and the group are ready, she shares the story. Everyone listens closely, including the group leader. Only when all agree she has told the story without error or omission will they go on to discuss the story’s applications. It is the first time in her life Ana has ever really had the Word. Not only is it unlocked for her, but she is learning to share it with others in her mother tongue.

In 2009, as part of follow-up training at a Bridges center in Madhupur, India, I was privileged to observe a team of twelve Santali tribal women. They have become local trainers of Bridges for Women, as well as the most accomplished story performing team I have observed anywhere in the world. Since their initial training in 2007 they have chosen scores of Scripture stories from the Bridges collections, and have developed an integrated oral arts approach to their presentation in their Santali villages. Having accurately memorized their stories and developed appropriate story forms for their Santali audiences, they develop songs using the exact words of the Bible and eleven traditional tunes. Repeated choruses highlight key themes. They then develop a dance and a drama to enhance the song and story. This team is exemplary, but similar artistic adaptations are being made in many places where Bridges for Women is used. The creativity in the workshops and in the field presentations is exceptional, and the drama is engaging and contextual. The song and dance forms and biblical poetic recitations are beautiful, indigenous to the region, and based on cultural practices. Everything is done with great attention to accuracy of the Scripture story. 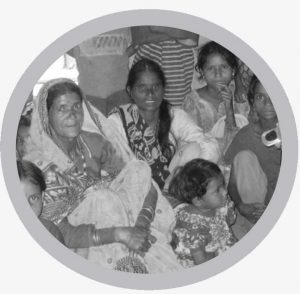 Indigenous practitioners and trainers are multiplying. Motivated women leaders are becoming experts in oral tradition and mentoring current and future generations. Successful women storytellers and oral arts teams are developing. Multiplication has not been difficult to achieve. Instead, it seems to take place spontaneously, yet systematically, wherever the vision is strong and initial training well taught.

To give just one example, in Vietnam and Laos some sisters have learned to use storytelling as a “Traveling Bible.” They journey from village to village,
to places where the Book is not allowed, with Scripture stories in their minds and hearts. They choose from their repertoire of memorized narratives for the appropriate audience and situation at a moment’s notice. As they travel, they train other believing women in the same storytelling skills, and so multiply the concept of Traveling Bible across the country.

The story goes on

When I used to meet women, they would share a lot of their problems, but I could not answer their questions since I did not know much about the Bible. I always struggled to pick up appropriate passages from the Bible to address their questions and problems. During my husband’s absence, I had to preach from the Bible in our house church. I was never confident. I also found that when I followed the preaching method which I picked up from my husband, people did not understand what I told them. Most of the people are nonliterates. But I continued to preach, of course with little result. I attended the Bridges for Women training at the Church Growth Centre in Chennai. In those three days’ training I learnt how to tell stories to non-literates. Moreover, the method of finding out the appropriate story from the Bible, answering the problems of the women in my place, was very useful to me. In that training I also discovered new avenues to use my gift of composing songs. Now I compose new songs from biblical stories. It is easy to share the Bible through songs. After the training we have started three new house churches in the nearby villages. In all these groups I am now telling stories, and also I am training young girls to share stories to others.

Carla and Jim Bowman developed Scriptures in Use, a ministry employing strategies for oral communication of the Scriptures among tribal groups of Latin America. Later, they developed the widely-used training series, Communication Bridges to Oral Cultures. Out of this, Carla developed a women’s track in 2006, Bridges for Women. The course addresses women’s issues, and facilitates a storytelling ministry among women of oral cultures, focused on the oral arts of storytelling, drama, song, dance, and recitation.