“How do you say this in Kahani?”

It was about midday. I sat on our shaded concrete porch and watched determined villagers, wearing worn flip flops, trek along dusty paths that crisscrossed the surrounding foothills of the majestic Himalayan Mountains. At the other end of the porch, I listened as my colleague asked our language helper for the equivalent of three pictures (a square, a circle, and a triangle) in the local Kahani language. After taking a long look at the shapes, our language helper responded with these words:

It was at that moment that I first realized I was living among an oral people group tucked away in the mountains of South Asia. Being from a predominantly oral society, our language helper connected the abstract shapes with concrete items found in everyday life. Someone from a Western, literate tradition would probably have described these shapes as a square, a circle, and a triangle.

For an oral society, an abstract idea like “shapes” may have more of a “foreign” flavor, and be interpreted as something outside of their culture. So, the question then becomes, “How might the potentially foreign-sounding truths of Scripture, such as grace and forgiveness, be transformed into an understandable form for an oral society? How can God’s truth reach these groups in such a way that they can truly connect?”

A glimpse into a cross-cultural storying project

About ten years ago, when I first began to seek where God was calling me to serve Him, He ignited a fire inside of me for India. Over the years, He has fanned the flame of that fire so that my passion goes beyond this country to the rest of the world so that I am praying for the many untouched people groups to be reached with His story in their own language. Just thinking of this task is daunting, but I have seen firsthand that through Him all things are possible.

In September 2005, my colleague and I moved from the United States to South Asia. For two years, we lived with the Kahani people group, and by God’s grace ultimately provided them with a set of twenty-nine biblically accurate, culturally relevant, retellable, oral Bible stories in their own heart language.

Several months after engaging in village life (which included cutting grass in the fields, chasing monkeys away from the fruit trees, carrying buckets of water on our heads, and soaking in as much language as possible), my partner and I moved into a larger town and began crafting stories with the local people.

“Maybe you can just try to tell what you heard,” I suggested to Anne, a Kahani village girl we had met through a local pastor. Due to our minimal language skills and the fact that we were still learning what was meant by “crafting stories,” my colleague and I made many mistakes during those first story-crafting sessions. One mistake was allowing Anne (pseudonym), our story crafter, to read the national language Scripture passage herself. Good practice would have been to present her with an oral presentation of the passage (which was previously recorded by someone else) in the national language. The outcome of that first storying session was a well memorized, fairly straightforward translation from the national language Scriptures into the Kahani language. Anne’s first recording may have been biblically accurate, but it was certainly not something that could be retold or even adequately understood by someone unfamiliar with the passage.

As time went on, we learned more of the language and discovered good story-crafting techniques. Most of our story crafters resulted from friendships with neighbors or shopkeepers. One of these friends was Grace (pseudonym), the niece of our unbelieving neighbor. 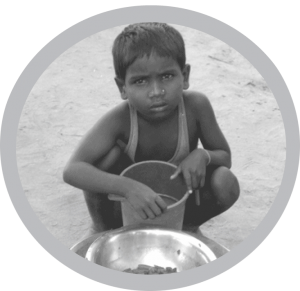 One day, Grace and I spent a few hours cutting grass by the river near her village. After we returned to the village, we sat down on a wooden table that is used as a bed and started crafting the story of David and Goliath. We listened to the passage of Scripture that had been recorded earlier in the national language by another neighbor. I asked Grace what parts she liked best and least. We talked about how her mother or brother might interpret this story and why she thought it might be important for Kahani people.

Grace’s cousins came into the room and drew pictures with pencils as we listened to the Scripture again. Grace began to picture the story in her mind. After having tea, she told the story from what she remembered. Shortly thereafter, we went to her sister-in-law’s home, just a footpath away, and sat on her roof (it was warmer in the sunshine than inside the house). Grace’s sister-in-law listened to the story and laughed when she heard Goliath’s description. She explained that the word Grace had used to describe Goliath meant that he was indeed tall, but also skinny, like a telephone or totem pole. Grace’s sister-in-law gave us a few natural phrases to use to describe Goliath. The next day, before heading to my home in the town, I asked Grace to tell the story one more time and I recorded it. The storying session over the course of two days resulted in a more natural and learnable story.

After recording a story, my partner and I met with other Kahani friends to listen to the story and double-check the content. We attached “anchors,” or Scripture references, to each section to ensure that each phrase was biblically accurate. I then took the recorded story to test with local Kahani people. We wanted to see if people who had never heard the story could understand it correctly and retell it easily.

One day, I sat on our concrete roof with a neighbor. We had just finished listening to the recorded story of David and Bathsheba and I asked her, “Do you think it was good that God forgave David for what he did?” She responded, “How could God forgive him? And why would He forgive him? I’ve been arguing with my sister for fifteen years, and we would never forgive each other because we would just fight again. What’s the point?”

Most Kahani people, including my neighbor, are high-caste Hindus and rarely practice forgiveness. Taking that into consideration, we developed David’s character by including four stories about him. We tried to show that even though David was in a high position (like the Brahmin Hindu), he still sinned. And yet, because God is so caring, He forgave David.

People began to see that forgiveness was important, but they still didn’t see how God, who is just, could forgive such a big sin. We asked several people how we could describe God’s character to show that He was undeniably capable of forgiving. Several Kahani friends suggested a phrase that means “God’s heart is very big.” We adjusted the story and tested it again. The response ultimately was, “Yes, it is clear that God was able to forgive David, and it is good that He forgave him.”

Who will tell the stories after we leave?

On a rainy January day, a little more than midway through the project, a few Kahani believers from surrounding areas gathered in a cold, drafty room of an old building. It was the first of three workshops that were held to help local believers learn about the storying work and how to pass on the stories after we left. Without a Bible in their local language, these believers typically used the national language to share about God. However, it was through this first workshop, conducted completely in the everyday language, that they realized they could talk about God in their own mother tongue!

A few months later, at the second workshop, the wife of a man who attended the first one told me,

My husband used to preach using a Bible. This is a foreign idea for many of our illiterate neighbors and villagers. He also taught in the national language that no one uses on a daily basis. Now he tells stories in the local language. The villagers want to hear more, and say that the message is for them because it is in their own language.

Near the end of our project, during the third workshop, twenty-nine approved and recorded Kahani stories were presented to the local evangelists in the form of CDs and cassettes. The training focused on starting story fellowship groups, where the local believers could use the stories to disciple new believers and attract unbelievers. As a result, several of the participants are now using their own mother tongue when sharing with others, and have included the stories in their strategy for reaching the Kahani area.

Taking the story to my own people—mother tongue storying projects

God led me next to a northern region in South Asia, where six language communities represent about sixty-five million people. The area is considered backward due to the low literacy rate. These six groups have limited or no access to Scriptures in their own mother tongue. My role was to coordinate six mother tongue teams as they crafted Bible stories orally into their own heart languages.

“The stories make it so easy!”

After re-recording one of his stories, one man, Oscar (pseudonym), from the mountain team, said, 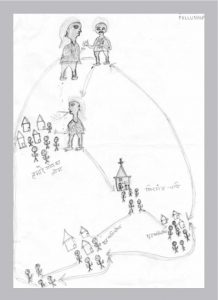 These stories have helped me share the gospel like I’ve never been able to do before. Last week, I told the story of Jonah, and an unbeliever heard that God forgives those who do wrong, which is something missing in his cultural worldview. After the story, this friend asked, “Will God also forgive me?” Before I knew these stories, I couldn’t find a way to explain these things in a conversation, but the stories make it very easy, and people understand when they hear the truth.

Near the end of the project, I asked Ben, another local member of our team, if he had been able to tell the stories in his village on a regular basis. He pulled aside a napkin that was on the table and drew a circle. Then he drew five lines stemming out of the circle and drew other circles at the end of each line. Stemming from each of those five circles, he drew more lines and more circles. He said, “This is what we are doing—I teach my wife the story and then she tells the story to a group. Then a few people from that group take the story to another group, and a few people from that group take the story to another group.” I wanted to cry as Ben drew this example of true multiplication of God’s story among those who have never heard it before in their own language. This is one of the main goals of storying projects, and a real answer to prayer!

Elizabeth Wilson, a graduate of the University of Delaware, USA, majored in English as a Second Language and taught in the public school system. In 2005, she joined Wycliffe Bible Translators to work with the OneStory Program in Southern Asia. Elizabeth crafted twenty-nine biblically accurate, culturally relevant, oral Bible stories for the Kahani people. Later, she coordinated six mother tongue teams as they completed oral story projects in their own languages. Currently, Elizabeth is consulting with story teams, training mother tongue teams, and developing OneStory’s two-year cross-cultural program.