Chapter 6 – Living Out a Visual Story

Sometimes we think of communication mostly in terms of words. Oral communication then brings to mind the spoken word, or perhaps preaching or teaching. This is the idea we envision when we think of taking the Gospel to the nations. However, we have also heard the common saying, “A picture is worth a thousand words.” In the Bible, there were many instances where God spoke clearly in pictures or visual images (e.g., a burning bush and a pillar of cloud or fire1 ). Jesus also used a variety of images to communicate clearly with His followers. Sometimes they were physical visuals such as the vine or the bread, or when He drew in the sand; sometimes they were word pictures frequently seen in His use of metaphors. How many times did He say the Kingdom of God is like a mustard seed, the wind, etc.? There are still many ways God communicates and reveals Himself in images today. Let’s look at how the visual arts are being employed to spread the gospel effectively in different cultures today.

God is love and His love penetrates to the deepest places of the heart, even when verbal communication is not received or comprehended. Visual communication is a powerful means of giving a voice to the voiceless. The act of creating through art enables others to speak, have a voice, and express often unacknowledged feelings. Especially in environments of poverty, loss, and neglect, art is extremely effective in helping to set individuals free by valuing and affirming each person through the process. By the act of creating, victims are able to speak, especially if through neglect or abuse they find themselves unable to verbalize. They are able to “own” their art piece and take pride in something they themselves have made or “said.” Moreover, when the created art piece is valued, it is a reflection of their Father in heaven’s heart toward them.

Visual art is a powerful way to enable the participants to remember God’s Word and character. If they see it, hear it, and do it, they will remember it. This is particularly effective with the children and teens I have encountered in South African prisons. Many cannot read. I became aware that in order to reach these people, I had to find ways to help them remember the things of God. A number of these children were victims of fetal alcohol syndrome and most were also victims of severe abuse and neglect. In addition, many of the children were also addicted to glue-sniffing, drugs, and alcohol. They needed to have a sensory experience which would help anchor God’s truths in their minds and hearts.

Alternate means of communication are common in this area. Many peoples in Africa express themselves through oral cultures. These are children from the “colored” ethnic group (i.e., a mixed-race population group, primarily descending from the earliest settlers and the indigenous peoples, especially as distinguished during apartheid from Blacks, Asians, or Whites).2 In this particular environment, the children are in a reformatory prison setting. They are confined to their cells unless they are able to attend a short morning school program or extracurricular activity offered by someone like myself, with my teams who accompany me on these visits. 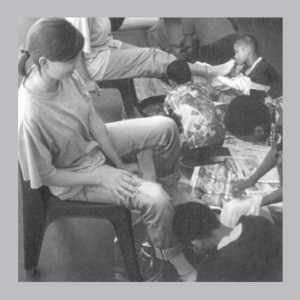 I turned to Mauricio, an artist missionary friend visiting from Mexico, and explained to him that the children needed to know that there was a “Daddy God” who loved them and wanted them to belong to Him. Mauricio did a large wall painting of God’s huge hands holding a small boy inside of them. While he did this, he shared his personal testimony by telling stories of how God met him and changed his life. He explained how God enabled him to forgive his abuser and then how he, in turn, led his abuser to Christ. When the painting was completed, we shared the Scripture from Isaiah 49:16 of how our names are engraved on the palms of God’s hands. Then I invited the boys to place themselves in God’s hands, by faith. Because they had been working on a project to make an art design using their names as the centerpiece, they brought those—designed in small, colorful pictures—and we glued the pictures to the large painting of God’s hands. Every boy chose to participate and one by one they symbolically placed their names in the hands of God. When I questioned the boys the following week about the stories we shared on that occasion, they could recount the stories back to me.

Another very powerful art project was also inspired by the Holy Spirit. I received clear direction to wash the boys’ feet, targeting a very hardened group of older individuals, who were thirteen and fourteen years of age. I decided that we would paint their feet, allowing them to choose the colors, and then print their footprints on a large painting. This art project would allow us to introduce the concept of washing their feet (just as Jesus did for His disciples) and pray over them as we did so.

Mauricio did a large painting of Jesus washing the disciples’ feet and we shared the story from Scripture while he went to work on it. We even described how Judas had his feet washed, even though he was going to betray Jesus. They all understood about betrayal— each had betrayed others or been betrayed themselves. We asked them to name those who were serving them in their lives. Then we posed the question, “Are you serving others?“ A meaningful discussion followed.

I watched their faces as I issued the invitation for them to have their feet painted and to choose the colors themselves. I explained that if they wanted us to, we would wash their feet and then pray for them afterwards. Grins began to spread across these hardened faces. It was one of the most beautiful things I had ever seen. When they were having their feet washed, all agreed to receive prayer. We then invited volunteers to paint and wash our feet, so they could know that their Daddy God was approachable and wanted them to interact with Him. So many boys wanted to wash our feet that I had to organize one boy per foot during the process. 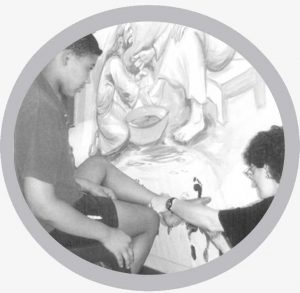 Again and again I have observed the profound impact of visual art in such settings. By using sensory methods, an unforgettable experience of God’s love is forged. Methods such as those that involve receiving and giving touch, the act of storytelling (hearing), and the visual and sensory stimulation of utilizing art materials in the memorybuilding process will engage the mind and enter the heart, bypassing the ingrained defense mechanisms. In a fun, delightful context, God’s truth is shared and remembered. Hearts are changed as the story of God’s love becomes real to them.

1 Exodus 3:2 refers to the burning bush; Exodus 13:21 indicates the pillar of cloud by day and of fire by night.

Paula Dubill, artist and lecturer, travels worldwide training individuals to use creativity and visual arts as catalysts for relationship and healing. Her MFA degree in Printmaking from Indiana University has opened many unusual ministry doors. In some thirty countries she has shared artwork, teaching skills, and art therapy with the disadvantaged and marginalized. Refugee children in the Thai jungle, detention homes for teens, traumatized burn and riot victims, and prisons are all venues for Paula’s visual arts ministry. From Singapore to South Africa, and now in Virginia, USA, Paula continues her ministry through writing and painting.

« Where do beads come from? Found in Translation: Misikir Mulugeta »