By Roy and Sheryl Wingerd

In one day, seven families listened to the story of the resurrection. Through the story, they understood who Jesus was and openly committed their lives to Him. The following week, they started a new house church in their own village. Today, they continue to learn about Jesus through other stories of the Bible.

Reports like this are becoming commonplace through a new and growing network in the East Indian state of Orissa. Church leaders and field workers attend monthly training on topics related to building a church-planting movement that aims at transforming the community. Oral communication has become the essential approach for training at all levels, from mission leaders to local believers.

The testimonies of what is happening give compelling evidence of the power of story. At a recent training session I asked for volunteers to share their experiences of communicating with oral learners. They had gone through one three-day training on the importance and process of Chronological Bible Storying. One worker immediately jumped up and told this story. He recounted that on the first Sunday after the training he decided not to preach, but instead put into practice what he had learned. That Sunday happened to be Easter, so he told the story of Jesus’ resurrection and what it meant. He had invited several families from the majority religion, and he began by asking a question, “Why do we take Sunday, the first day of the week, as a day off?”

To answer the question, he told them the stories of what happened nearly two thousand years ago on one particular Sunday. He followed with other questions to help the people discover that Jesus had to suffer and die and be raised again, according to the Scriptures. They also observed how many people had seen Jesus after He was raised. Then he explained that this is why the followers of Jesus are so committed to telling everyone about him. Seven of the families responded, “We finally understand who Jesus is and what Christianity is all about. Now we want to follow Jesus, too.”

This testimony illustrates the growing awareness of oral culture, leading to more effective communication of the Gospel. In Orissa, Christian workers face challenges due to the high percentage of illiterate and functionally non-literate people. The 2001 census reports a high literacy rate, yet many people classified as literate do not really understand what they read. In fact, it is estimated that more than 80% are functionally non-literate. The way they receive and understand information and make life-guiding decisions is what defines them as an oral culture. This reality posed a significant problem for the spread of the gospel.

In 2006, I met with church and mission leaders across Orissa to discuss issues that were most significant to them in enlarging the kingdom. Their most pressing training needs fell into four main categories: house church strategies, prayer and prayer walking, leadership development and mentoring, and marriage and family transformation. Few church leaders seemed to recognize that one of the biggest issues they faced was the need to understand how to communicate effectively with an oral culture. Fewer still seemed to see this as a problem or to have an intuitive sense of what to do about it.

Many church planters shared that a primary means they were using for starting ministry in new villages was tract distribution. Their own reports indicated the tracts often meant nothing to the non-reading villagers except for arousing suspicion about a foreign religion. And the church planters had many stories of rejection and abuse to prove it.

Eventually, however, oral communication emerged as a vital area of training equal in importance with other issues. On behalf of church planters and leaders in Orissa, my wife, Sheryl, and I began to explore what resources were available to help them develop skills in this area. We scrutinized various materials, looking for principles and practices that seemed to fit the context of Orissa, and began learning from various experts in the field. We had known Rev. S. D. Ponraj and his wife, Sheila, for many years, and of their oral communication training in the state of Bihar. When the opportunity arose, we attended a one-week training led by Dan Vannelli of Scriptures in Use (SIU),1 which was the basic approach used in Bihar. The training provided a foundation for understanding how to communicate stories effectively. It helped us to understand the cycle of storytelling from stone clearing and seed sowing, to watering and harvesting and then on to leadership development. Oral communication could be used effectively throughout this entire cycle.

Dorothy Miller introduced us to Simply the Story.2 Her approach emphasized two key principles: (1) telling “whole stories” as they are recorded in the Bible is the “simple” foundation and (2) using stories and questions to help people discover biblical truths and treasures is the strategy that unleashes the power of self discovery. The Training of Trainers course, led by Stan Rowland of Medical Ambassadors (now called LifeWind),3 used in the context of Community Health Evangelism, was also useful. Jim Slack’s writing explained the principle of Chronological Bible Storying,4 and Bruce Graham added to our worldview understanding, outlining the core questions all cultures address that form the basis of their worldview.

Putting the puzzle together

We began integrating these principles in January 2007. We invited Sheila Ponraj and a gifted Bihari storyteller, Lal Bihari Mukhiya, to participate in a spiritual retreat with one hundred leaders from thirty-nine missions in Orissa. The retreat introduced basic training on all the topics (including oral communication) of major interest to Orissa church leaders. Participants expressed an urgent need to develop a training program they could use at regional and grassroots levels. Around the same time several of the leaders in Orissa worked with Dorothy Miller’s team to record God’s Story in the Oriyan language. A couple of these later attended Simply the Story training and several others attended training on Community Health Evangelism.5 This helped us build a team of master trainers to begin training at regional levels.

Over the next year we developed a new training program with this team. The state was divided into ten zones. Eight topics were selected for three-day training events in each zone, with one or two topics taught each month. The topics included oral communication, prayer, house church strategy, family transformation, body life, mentoring leaders, community health education, and self-help group administration. Each topic was covered at least twice a year, since most adults do not learn new approaches in one sitting. This allows for repetition and ongoing discussion.

Currently, three hundred mission leaders and regional coordinators from fifty-six missions are receiving training. The aim is to train the leaders through the same methods they themselves must use when they train oral learners in their fields. This way, they do not have to figure out on their own how to switch learning styles from a literate approach to an oral approach. Six of the topics—including oral communication, prayer, house church strategy, mentoring leaders, family transformation and body life—now have modules and story lists in place.

At the close of one training session, a pastor said, “I have been preaching sermons for years to the non-literate people in my congregations and have never once interacted with them to see if they understood and remembered what they heard.” Mission leader Ashok Kumar Suna says, “I used to carry my Bible with me when I visited the villages. It always raised questions. Now, I carry the stories in my head and I have no problem.” Nimal Kumar, another leader, expressed, “People no longer see me as a pastor, but as a storyteller.”

We present all our lessons using stories. The people keep the stories in their minds and they share them with others. Workers are leading their churches using the stories. This has greatly affected our communities. Offerings have increased from 50% of the people giving to 75%.

Sister Ashalata, wife of mission leader Abeda Nayak, told about the impact storytelling had during the outbreak of violence and persecution in Orissa in August 2008:

Oral communication is having a tremendous impact in prayer, leading to multiplying house churches and prayer cells. Sister Jharna attended a training session where she learned how to pray by understanding the Lord’s Prayer. She says that in eight months she taught over five hundred women to pray the Lord’s Prayer, especially asking Him to give them their daily bread. One group of eleven women had been barren for at least eight years. After hearing the stories on prayer, they prayed, and within a few months all of them became pregnant. Sister Jharna has now helped start 150 house churches and 60 prayer cells through her storytelling.

John Victor, pastor of a main church with several smaller congregations, says his congregations never had a pattern of giving for missions until we shared stories about giving from the New Testament. They decided to dedicate the offering on every third Sunday of the month specifically to missions. After a year and a half, their average giving has increased from INR (India rupees) 100 to INR 1,200 per month. 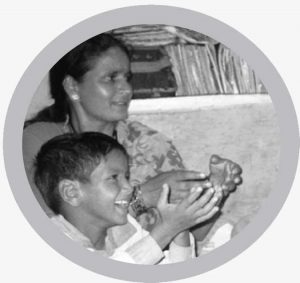 During a recent training on mentoring, there was an extraordinary response to stories from Matthew 20 and 23 on Jesus’ pattern of leadership. The participants explored the meaning using simple questions. The next day, a spontaneous time of confession and repentance broke out and the translator himself was so convicted that he excused himself from translating.

From January 2007 to November 2009, leaders from 40 organizations reported starting 3,807 new gatherings of believers and reaching 33,756 new followers of Jesus. Oral communication was a major contributor in approximately 50% of these results. These brief reports reflect a small part of the impact that storytelling is having.

The next steps for further development of oral communication in Orissa must focus on developing more and better stories lists for a growing number of issues and areas. We are greatly encouraged to see the progress made in only three years as a growing number of leaders and workers embrace these principles. As more church leaders own the challenges of oral culture in Orissa, we fully expect to see much greater impact for the kingdom.

5 For a description of this program, see CMF International at http://cmfi.org/ whatwedo/community-health-evangelism (accessed 14 July 2010).

Rev. Roy A. Wingerd Jr. is Founder of South Asia Now and works in partnership with the Foundation for International Research and Education (F.I.R.E.) to develop a model holistic movement in Orissa, India. Roy served with OCI from 1982 to 1989. From 1989 to 2005, he served Dawn Ministries as Director of Research and South Asia Coordinator. He has a BA in Religious Studies from Westmont College, and an honorary MA in Christian Ministry from Open College of Biblical Studies and Missions in Nagpur, India. He lives in Colorado Springs, Colorado, with his wife, Sheryl, and their daughter, Melanie, son-in-law, Curtis, and grandchildren, Elizabeth and Corin.

« Where are the Elijah’s in Prayer? Where do beads come from? »