LITTLE ROCK, ARKANSAS (ANS – June 16, 2017) — After 24 hours of flight, a bus ride and a two-hour car ride they arrived in the remote village deep in India. The leaders gathered the villagers, and a young woman was called to the front. Cloaked in a headscarf and full attire she shared the story of the Woman at the Well. Men and women alike were listening to the story she told about Jesus’ encounter with the unmarried woman from Samaria. Jesus’ prophetic words to the Samaritan woman left the crowd in India speechless. Christ had spoken to a woman, told her who she was and called her to Himself. After hearing the story of the woman at the well, 50 villagers came to know the Lord and were immediately connected to a church body. That storyteller was me. 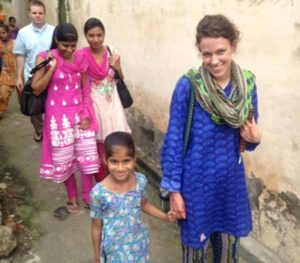 Lauren with a new friend in India.

In the summer of 2014, I was asked to join a mission team headed to India. Our focus: telling Biblical stories. Our short-term team prepared for four months prior to departure. Each of us crafting the perfect intro and conclusion questions for our stories. The ministry had done prep work for three years prior to our arrival. All they needed us to do was draw a large crowd, because the natives were curious to see the foreigners. Once the crowd had gathered, we told them the stories straight from the Bible.

Each night the locals gathered around our team because they wanted to see the Americans. And, it worked. The crowds gathered, we told stories, and hundreds came to know the Lord.

Let’s back up; almost five years ago I read the book Truth that Sticks. Author, Avery Willis opened my eyes to the need for Oral tradition, the effectiveness of the Orality Method and the statistics on the overwhelming number of oral learners in our world today. I was intrigued to say the least. Western culture is leaning away from oral processing and depending on written text. I spoke to many people around me about oral tradition and how interesting it seemed. Through a mutual contact I was connected to Rick and Jayne Breckelbaum. The Breckelbaum’s were trained in Orality under Jerry Wiles, who is now the ION North American Leader and a regular contributor to ANS. I took a chance and emailed the Breckelbaum’s. At the time I was working for a church helping with mission-related leadership development. The church I worked for invited the Breckelbaum’s to lead an Orality training weekend.

Rick and Jayne arrived on a Friday afternoon. Ten people were scheduled to attend the training. Most of the attendants had registered because they had a personal relationship with the Missions team of the church, not because of their understanding of Orality.

When the training began, someone turned off the lights. I immediately began to wonder: “What have I done? Who are these people and what are they going to do?” A candle was lit and a booming voice began to tell a story. A knock came from across the room as if Nicodemus (John 3) was entering the very room we were sitting in. All eyes were glued to the storyteller. The hair on the back of our necks stood up. I heard the story unlike any other time before. I felt the emotion of the story and the connection to the characters. I heard Jesus’ words to Nicodemus and Nicodemus’s questions to Jesus.

Arkansans typically reserve fall weekends for Razorback football. Giving up a Saturday for training sessions was certainly a tug of war, but as soon as the first story was told, everyone was hooked. We studied God’s word in story form Friday night and most of Saturday. As much as I read or learnt about Oral Tradition, I could not fully understand it until I experienced it. I experienced it that weekend and was moved by it. Everyone in the training went away with a different perspective. Each of the ten attendees represented a different ministry in the city. Each of those attendants, ranging from 18 to 60 years old, began to dream about how they could use these ideas in their spheres of influence. 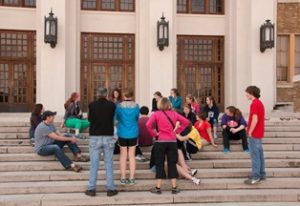 After the training, we were all hungry to learn more about how to implement what we had learned. At the time I was working as the Leadership Development Coordinator for Fellowship Bible Church. As part of my role I was overseeing an internship and residency. The Local Missions Pastor, Ray Williams, and I created a Mission Story set. It was ten stories we felt helped embody God’s mission throughout the Bible. A few months later we trained our summer interns in Biblical Story Telling and handed them the first story. These students were high school sophomores through college juniors. They caught on much faster than even Ray or I did. We trained them by telling them the first two Bible stories in our set. Then we handed them their set of stories to know and learn. We did this time and time again. Every time, the students responded extremely well to the way of learning.

After the success with our summer interns, we implemented a story set with our college residents. They spent one year with us learning about missions and ‘life on mission’. Because we had students for a year, the story set was larger and more in depth. We focused on key principles, looking for stories which illustrated leadership skills in the life of Christ. Orality was a game changer for the residents. The stories were easy to understand and retain.

These interns and residents learned the orality method and were using it enthusiastically for God’s Glory for the year they spent with us. Regardless of the setting the basic things we would train them on were:

For four years we trained on this simple method with approximately 50 to 100 young adults. We even trained a few short-term mission teams who served in Little Rock.

Orality is an extremely engaging and effective method for all ages, cultures and times. In my limited time and exposure to Orality Methodology, I have seen 100 people trained and 1,000 come to the Lord. It crosses ethnic, generational and physical boundaries. It spreads easily and quickly and, most importantly, it is reproducible. It is revolutionary. If I can see impact of that many people in less than 5 years, think how many people could be impacted through the successful implementation of this method in spheres of influence.

What’s the point of all this? Whether it is stateside or overseas, in business, or multigenerational settings, for evangelical efforts, or leadership development of maturing believers – stories speak to us. They move us emotionally and physically. They allow us to understand God’s word in a new way. 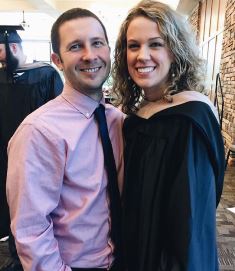 Lauren Linz with her husband, Adam.

I am reminded of Jesus’ ministry. He told stories. In fact, we have no proof that He wrote anything down. Think of the Bible; it is a collection of stories. Our environment of Western tradition has left the stories of the Gospel, and focused instead on logic. In religious settings we formally call this systematic theology. By doing this, we are inadvertently losing our ability to connect with stories which effectively illustrate principles of the Bible.

God is writing a Meta-narrative, one large overarching story that transcends time and encompasses the stories of all people. This meta-narrative includes the story of the Woman at the Well, Nicodemus, my story and your story. He is using all of these stories to teach us more about Himself. I am going to leave you with one final question.

As a part of God’s greater story, what stories are you communicating and weaving into history?

Lauren Linz has a Bachelor of Science in Organizational Management and a Master’s of Science in Leadership and Ethics from John Brown University. She is currently joining the Nehemiah Network, a local church network, team overseeing leadership development endeavors. She and her husband Adam have been married just over a year.