Proclaiming the word of God

Sometimes translating the Bible is a long process. Take the Bakossi language of Cameroon, for example, the project first started in 1974. The running of the project was taken over by CABTAL*  during the  1990s and the Bible was finally launched in 2011, 37 years later. As the project progressed the Bakossi church was increasingly involved and after the launch, the Bakossi churches were handed the task of continuing literacy efforts and helping people learn how to use Scripture in their mother tongue. 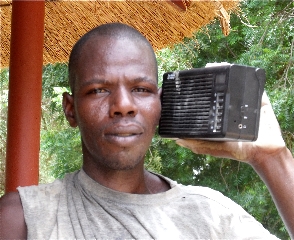 Man listening to a proclaimer

However, one issue was that the Bakossi, like two-thirds of the world’s population, are oral learners. This means that even when they can read and write they often prefer to learn through oral means, and some will never learn to read and write. Our partners Faith Comes By Hearing stepped into the breach and produced an audio version of the Bible, which was recorded soon after the launch in 2011.

The next step was to put the recorded Scripture onto microchips which are installed in specially designed audio players called Proclaimers. Proclaimers are easy to use and have good enough sound quality to be heard by groups as large as 300 people. It’s little wonder they are popular, so popular in fact that there weren’t any immediately available for the Bakossi.

Paitence and perseverance were again rewarded when supervisors’ training took place in April this year and immediately 23 listening groups were set up with 1,000 people attending. This in turn has resulted in an increased demand for Bibles, as people want to read along to what they are listening to, all the while improving their literacy skill.  Praise God!