Omeed Jouyandé explains why Herod and “all Jerusalem” had good reason to be alarmed by the arrival of a group of Magi from Parthia. But their mission was not as Herod feared – and their faith and identity remains an inspiration for Iranian Christians today.

“They hear about Magi from Parthia1 and are amazed to learn that there were Persians at the birth of Christ who gave gifts and paid homage to Him.”

Who Were the Wise Men?

Jerusalem 2,000 years ago attracted a constant stream of visitors for commerce and the feasts of Judaism. A few more men, wise or otherwise, would surely have got lost in the throng. The Magi’s true identity is the key that explains why their arrival caused such panic (Matthew 2:3) in Jerusalem. 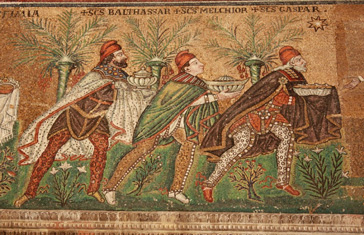 Procession of the Magi, fifth-century mosaics in the Basilica of Sant’Apollinare Nuovo

To the East of Jerusalem was the Parthian Empire. It was the second of Persia’s great empires and had briefly controlled Israel some 35 years before the birth of Jesus. Rome and Parthia were enemies. Their regional rivalry was characterised by war and conflict, with Israel literally caught in the middle.

Members of Parthia’s priestly class were called Magi2. The Persian Magi were not only priests, but had knowledge of strategy, philosophy, and astronomy. It was a council of Magi that convened to select a new king for the empire.

So, it was a council of Parthian king-makers, probably with an armed guard, that arrived in Roman-occupied Jerusalem, asking to see the new-born King of the Jews.

It wasn’t only the Magi’s question, but their very identity that upset everyone. Herod met the Magi in secret, most likely fearing that his Roman overlords might suspect him of conspiring with Parthia.

A Journey of Faith

But the Magi’s journey to see the Messiah was one of faith as well as geography3. Far from what Herod feared, the visitors had not come to further the ambitions of Parthia – they were looking for a Messiah whose kingdom was not of this world (John 18:36).

They were seeking a King with significance for all nations:

“It is too small a thing for you to be my servant to restore the tribes of Jacob and bring back those of Israel I have kept: I will also make you a light for the Gentiles, that you may bring my salvation4 to the ends of the earth” (Isaiah 49:6).

Asked about the Messiah’s birthplace, Herod’s priests answered “Bethlehem”, confident in their knowledge of the scriptures. Yet, as beneficiaries and guardians of the prophecies of His coming, they lacked the faith to travel the final nine kilometres from Jerusalem to Bethlehem to meet their Messiah.

Had they ceased to believe the scriptures? Jesus certainly expected them to know the signs of the times and to recognise the times of His coming (Luke 12:54-56 and 19:42-44).

A Shines in the Darkness

Isaiah’s prophecy of the Messiah being a light to the Gentiles continues to be fulfilled. Today, as the Gospel is broadcast, far and wide, by SAT-7 and others, this Messiah is reaching as many in the Persian-speaking world and beyond who will hear and receive Him.

The Magi’s example encourages us as believers to be alert and watchful. Knowing that the same Jesus who fulfilled scriptures in His first coming will do so again, when He returns to inaugurate His everlasting kingdom. Then every knee will bow and every tongue confess that Jesus is Lord, the true King of all.