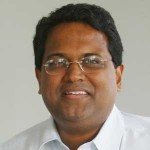 Dr Alex is a strong champion of the role of the church in transforming communities in India.  He is the National Facilitator for Transform World India Connections (TWIC) a network of missions and agencies working across the nation of India networking, connecting, informing and motivating God’s people towards God’s transformational mission. He serves also as Facilitator for the Transform World South Asia which brings together eight nations in South Asia along with the Diaspora providing transformational focus.

Dr Alex is Director of New India Evangelistic Association (NIEA) a holistic Indian mission founded three decades ago by his late father Dr Abraham Philip, a visionary who desired to see as many people brought to Christ as possible, especially from among those who were most needy. NIEA has grown to be a multi-faceted transformational ministry initiative in ten states of India.

Alex and his wife Laly Philip, an educator, live in Bihar, Northern India with their two young daughters. Together, Alex and Laly provide leadership for a growing missionary movement including theological training institutions, child care centers, churches, primary schools and village clinics with more than 500 full time staff, 3,000 students in 12 schools for children from poor villages, and homes that take care of 700 destitute children some of whom are orphans.

Alex was born in Nigeria, raised in the US, educated in India and is a trained medical doctor and a missiologist.  He was trained in Christian Medical College Ludhiana, where he received the Gold Medal for the Best Intern upon Graduation, and also the prestigious Gold Medal for Community Related Health Interventions.  He served in Pune in the early 1990’s and since 1995 has been focused on serving the under-served in Northern India – especially Bihar.  NIEA’s newly started Christian Medical Centre & Hospital in Bihar focused on serving the under-serving, rural and those with little access to health care occupies much of his time these days!

His heart’s passion is to see God’s Kingdom come around the world, especially in areas which are unreached, Bible-less and least evangelized.