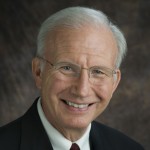 Steve Douglass is President of both Campus Crusade for Christ International, and Cru, as the ministry is known in the United States.

Douglass came to the ministry after graduating from the Massachusetts Institute of Technology and Harvard Business School. Over more than four decades of service, he has held a variety of positions, including Executive Vice President and Director of U.S. Ministries. In July 2001, Douglass took over as the President of Campus Crusade for Christ International from founder Bill Bright.

He is the author or co-author of several books, including Managing Yourself, How to Achieve Your Potential and Enjoy Life, How to Get Better Grades and Have More Fun and Enjoying Your Walk with God. His radio program, Lighthouse Report, airs daily on 800 stations.

Along with his wife Judy, Steve Douglass resides in Orlando, Fla. They have three married children and seven grandchildren.