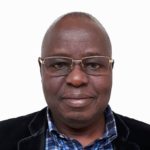 Victor Madziakapita is married to Anele and they have 4 children: 3 biological and 1 adopted. He worked for World Vision International for 26 years in the area of Christian development. He then became a consultant together with his wife for two years. He  joined Living Waters International in 2011 where he still works today. He got saved while in high school and his journey as a Christian became serious while at university, where he held several leadership positions in a Christian Organization.

He now serves as Leader at Nairobi Chapel (Church) and is a board member of Daystar, a Christian university in Kenya. Victor has a PhD in Development Studies from the University of South Africa and he is an adjunct faculty member and examiner for PhD students in that University. He was introduced to Orality in 2012 and since then has enjoyed working with communities in that regard. After attending two ION meetings his passion for orality grew, leading him to serve as the Regional Director for ION in Africa.