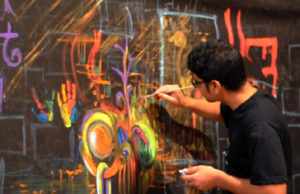 The Mini-Cairo project introduced children, from eight years and up, to every aspect of the film-making process: from script-writing to acting, drawing to filming, as well as set-painting and make-up. The play city, which was run by the Jesuit El-Nahda Association, opened in a film studio for a week in September 2017.

The children at Mini-Cairo were free to move between different creative stations manned by expert volunteers, enabling them to focus on their own interests. The workshops were a hit with the young participants, who often returned to the same station on multiple days. Volunteer Zoe Schmederer worked with the children and helped record their creations that they would eventually watch together on a cinema screen. She said:

“I think it is a great experience for children… they can be themselves and try out new things. They are gaining experience outside of the restrictions they normally face, such as gender stereotypes or inhibiting statements like ‘You are too young for this.’ We let the children experience things themselves, fix things, get dirty. This opens doors and creates possibilities.”

Among the other experiences on offer was a workshop that taught children to express their thoughts, stories, and ambitions by making comic-book storyboards.

Passing on these experiences to young viewers fits perfectly with the ethos of SAT-7 ACADEMY, which encourages critical thinking and creative problem-solving among the future leaders of the Middle East and North Africa.

Like the children who took part in Mini-Cairo, City of Films’ audience will benefit academically. Many children use media tools at school, so teaching them how to make films at home will give them a head start. Mariam Abdel Rahman, Manager of the Mini-Cairo project, explained:

“The children will learn how to use the tools they have at home to make films. We teach them how to use the simplest tools to produce their projects. For example, they will learn to cut fabrics using newspapers or create film posters using pictures from old magazines.” 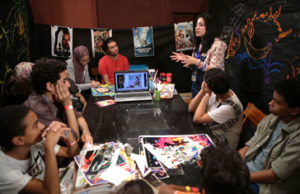 The new skills and passions that viewers will pick up from City of Films could even become life ambitions that propel them to become tomorrow’s film-makers. AbdelRahman shared the story of one 12-year-old participant who spent the whole week in the animation workshop. The boy told the organiser that he wants to be an animation artist.

The Mini-Cairo project was based on the successful Mini-Munich play city in Germany, which is also televised. The much larger original scheme invites tens of thousands of children each year to try out every aspect of city life, from creative projects to business and administration. Mini-Munich has also been replicated in many other places around the world, including in 40 different Japanese cities.

« Telling an oral Bible story by a flowing stream ...Orality Missiology: The Next Big Thing in Comple...»