Oral storytelling has a long history in many people groups. In some cultures, stories are the principal means of communicating community history and values. These stories can evoke strong, deeply emotional reactions from the listeners. Peter’s preaching on the day of Pentecost is an ancient example of a moving oral recounting of a people’s history. After he told the sad story of God’s struggle with His chosen people, Israel, those in the audience were “cut to the heart” (Acts 2:37). Nearly three thousand people responded to his call to repentance that day. Stephen told a different audience the same story, and he too evoked a strong response, and was dragged out of the city and stoned to death! In each case, the listeners heard God’s truth, processed it at a heart level, and then made a decisive response.

This chapter describes a church-planting project in Muslim North Africa, in which evangelism, discipleship, leadership training, and reproduction of new house churches are all driven by storytelling. This project is supported by the OneStory Partnership.1 While we are still in the development phase with this particular people group, it has already yielded surprising results. Our goal is to see sustainable, reproducing house churches that have access to the riches of God’s Word through stories told in their heart language.

A quick peek at a typical OneStory house group

A typical story group in our Muslim North African setting takes place in someone’s living room. Monica (pseudonym), who has become a follower of Jesus after being raised in a Muslim home, has several friends over from work and from her neighborhood. She has shared her faith with these friends in the past, but with little evidence of interest and no response. Recently, however, Monica’s friends have been gathering at her house each week to hear Bible stories told by a storyteller. 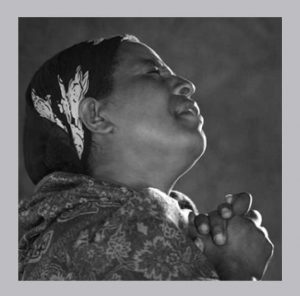 Each week, the storytelling time follows the same simple pattern. After visiting with the people for a while, the storyteller begins by saying, “Today, I’d like to tell you a story from God’s Word…”

The first time the group met, the story began at the beginning, when God created the world and Adam and Eve. After the three or four-minute story, each person tried to repeat the story for the group. Although it was difficult for the first person retelling the story, it was a lot of fun. By the time everyone had taken their turn, each knew the story perfectly. Then the storyteller asked a few simple questions such as, “What did you like about the story?” She asked the same five questions every week. Usually the discussion between the participants went on for an hour or more as they examined God’s truth and their own hearts, looking together for God’s answers to their own heart questions. If the storyteller was asked a question, she just repeated the relevant part of the story and asked them to answer the question themselves. Sometimes she answered questions by telling another story altogether. While Monica was learning a lot, it wasn’t because the storyteller was teaching them. The stories themselves were the lesson. Each time the storyteller returned, she told another story. Each time, everyone retold the story until they all got it right. And the discussions were becoming very, very interesting.

The third week’s story was about Cain and Abel. Vera (pseudonym), a doctor, could relate to Cain. She had tried to please God as a Muslim, and yet she knew in her heart that she had failed. God, as she had known about Him in Islam, was very far away— and so great and important that He couldn’t possibly care about her personal struggles. Yet in these stories, she saw that God cared deeply and was reaching out to people, even those like Cain. Could He reach out to her, too? During the discussion time, she asked this same question, and several others joined in to talk about how God seemed to care, love, and relate to the people He had created. Vera shared that deep in her heart she wanted God to reach out to her, like He had reached out to Cain. In response, the storyteller told her another story, this one about the Messiah who died so that God’s desire for a relationship with her could be a reality.

Vera decided then and there that she would accept Jesus as her Lord and Savior. And she was not alone. As she prayed to receive Jesus, another person in the group was also mouthing the words to the prayer. Jasmine (pseudonym) was a single mother who had not completed high school. Life had been hard and unfair for her, and now she wanted to give all her pain and disappointment to Jesus and follow Him. This was a special day for the group, and especially for Vera and Jasmine. They could hardly wait to go home to tell the Cain and Abel story to their own friends, and they hoped the storyteller could come back soon. Monica was elated to see her friends finally know the joy she herself had found in Jesus. These friends continue to meet together each week with several other believers and are forming a new house church.

While this group experienced dramatic results after only a few stories, this is by no means exceptional. Young and old, men and women, illiterate farm girls and university students…each has found Jesus through listening to Bible stories told to them and their friends.

Why does this approach work so well?

Why are simple, three-minute Bible stories so effective with a people group that has resisted the Gospel for over 1,300 years? We know that the Word of God is sharper than any sword: “It penetrates even to dividing soul and spirit, joints and marrow; it judges the thoughts and attitudes of the heart” (Heb. 4:12). Scriptures are available in classical Arabic, but are difficult for most people to understand. For this people group, their mother tongue is a North African dialect of Arabic far removed from the classical language of literature. Stories in the mother tongue communicate God’s truth in a way that cuts right to the heart.

It is not just the oral nature of storytelling that makes these groups so effective for leading people to Jesus. Every time the group meets, everyone who comes learns the story by heart, and retells it to the group themselves. The retellings are very important, motivating the listeners to think deeply about every phrase. With everyone knowing the story by heart, the discussion following is invariably deep, provocative, and life-changing. This is where the biblical truths of the story are examined and applied to the listeners’ hearts and lives. Using the same simple questions to start the discussion each week allows the listeners to address their own heart issues, rather than being forced to answer questions to which someone else thought they ought to have answers. It also frees everyone who learns the story to lead their own story group.

There is another strategic reason each person is required to retell the story he or she hears from the storyteller: once he or she has learned and retold the story with his or her group, the person is ready to go out and tell the story again to his or her own family and social groupings. Even before people decide to follow Jesus, we find them telling each week’s story enthusiastically to friends and family.

One reason for the effectiveness of the OneStory approach is that the stories we tell do not come from a standardized list. The stories that “make the cut” for a people group’s story set must address why this particular people group has not yet responded to the Good News. The issues Muslims have with the Gospel are different from those atheists or Buddhists might have, so they need to hear different stories.

Muslims, for example, have a defective concept of sin. In Islam, sin is more like what we would call a mistake. They do not typically yearn for a restored relationship with God, because they don’t think this is even possible or desirable. Islam is a works-based religion. Without an awareness of the problem of sin breaking our relationship with God’s love, Muslims see no need for Jesus to die on the cross, and the Gospel is “foolishness.” In fact, 1 Corinthians 1:23 says, “But we preach Christ crucified: a stumbling block to Jews and foolishness to Gentiles.”

Arguing with Muslims about the meaning of sin or the nature of God has rarely been fruitful in my experience. Yet, simple Bible stories bring God’s truth about these stumbling blocks deep into people’s hearts. The story presents the truth, the retelling cements it at the heart level, and the discussion leads the listener to wrestle deeply with what he or she has heard. It is a very powerful process.

The mechanics of establishing and multiplying groups

As effective as these stories are in leading people to Jesus, OneStory is not simply an evangelism tool. Bible stories communicated orally are equally effective in discipleship and leadership development, and for all the same reasons. Story groups can and should develop into house churches, led initially by the storyteller. 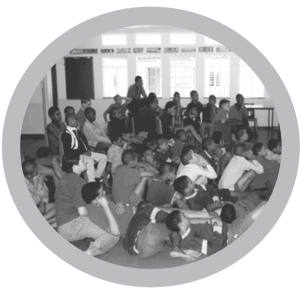 Since each member of the group knows all the stories by heart, spiritual growth is often rapid and deep. And because each member of the group has already told each story to his or her home group, it is not too big a leap for one of the group members to begin a story group with his or her own friends or family. The same five questions are used to facilitate the discussions each week, so no further training is required beyond the experience of participating in a group. Everyone who has been part of a story group has already experienced how God touched their own heart. Many have also experienced firsthand how to plant a house church. Using short, simple stories and the five simple questions, they see God at work right in their own living room. If it can happen in Monica’s living room, why not in yours or mine? Every story group has what it needs to help start new story groups. They know the stories, they know the discussion questions, and they’ve seen the results in their own lives.

In our North African setting, the Gospel has made very little headway until quite recently. While our OneStory project has not yet completed its full panorama of Bible stories targeted for our people group, it has been surprisingly fruitful. Because they are simple, easily reproducible, and effective across socioeconomic boundaries, orally-shared Bible stories, told in small groups following the pattern described above, may be the tool God uses to reach this people group for His glory.

Ralph N. Danita (pseudonym) is a missionary with the International Mission Board, SBC. He and his family have been serving in the Middle East and North Africa since 1989, and are currently using stories to plant local house churches. The Danitas have four grown daughters.

« What If We Could Tell the Great Story Like the G...Why Study Orality with Tom O’Loughlin »