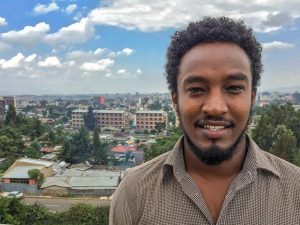 “Do you really believe that one needs to be literate to become a good disciple of the Lord?”

When we train people to share Bible stories in oral cultures here in Ethiopia, we start with that question. Most people will answer yes. But what we want to show them is that people really don’t have to know how to read and write. And then we try to show them how much the Bible was transferred to the next generation orally, even in the Old Testament.

At first, they are suspicious: “Where is he going with this?”

Especially those who are literate don’t want you to say that. They have more part in the church or in a ministry because they know how to write and read.

Those living in the villages and doing farm work think they were not called to this work. But we try to show them that the Lord is working with His Word and through His Holy Spirit, and that they don’t really have to write it and read it. They don’t have to be called ministers of God and be paid by the church in order to share the Gospel.

We encourage them to start a story group. It doesn’t have to be big. For example, one storyteller in our group went to a barn full of horses and cows. There was this old man who was cleaning the barn by himself. So the storyteller helped him, and that made the man really happy. Then the storyteller started going twice a week just to clean the barn.

In the stone-clearing stage, all you have to do is start a good relationship with people. Love them and let them learn to love you. So at first, this person was not telling stories to the old man in the barn. He was just helping him and forming a good relationship. But after a while, he started telling him stories from the Bible once in a while.

And now there’s a story group the meets in that barn, seven people. That’s how it works. We tell people a story and maybe ask them a question or two from the story. And then we just pray and let the Holy Spirit lead them. They start to see the potential that the Lord has kept in their hearts, just because of the stories and the Bible verses they know.

It is really the Word of God. It does make a difference.