By SAT7
Written by George Makeen

Everyday experiences of isolation are something that all of us have become familiar with since the arrival of COVID-19. Middle East and North African (MENA) nations have been affected too, although isolation in other ways is a daily reality that many of the region’s Christians know only too well. Cairo-born George Makeen, SAT-7’s Arabic Channels Programming Director, explains how this isolation came about, how media is overcoming it, and what Christians in the West can learn from their brothers and sisters.

There are many theories that try to explain the reasons Christianity remained in Egypt while it was completely wiped out from the whole North Africa as Arab Muslims conquered the region. One interesting theory I came across talked about the language being used in the Egyptian (Coptic) church liturgy and worship was the same language people used in their daily lives. In the rest of North Africa the church was using Latin in its liturgy, while in daily life people were speaking other language(s), Berber being the dominant language. The theory concludes that for Egyptians, Christianity was part for their culture, of their daily life, this is why they were more careful to hold on to it, while in the rest of North Africa, Christianity was for the elites, but it was not part of  daily life, or part of the culture. This is why it was easier to be replaced by the new religion of the conquerors.

This theory fails to explain the socio-political background of the region; the division of the Roman empire and the division of the church in North Africa etc. Yet, the interesting and true thing is the fact that for a religion to flourish, it needs to be part of people’s daily lives otherwise it fades away or turns into some abstract practice or dogma.

In the MENA region, there are two types of Christians. The first one is in countries that still have recognisable Christian minorities like Egypt, Syria or Iraq. Years of persecution and hostility pushed Christians, to hide  behind their churches’ closed doors, leaving behind them a majority of a society in hostility with Christians and Christianity due to years of ignorance and beliefs in destructive misunderstandings. But these Christians are in a better position compared with other countries where Christianity is not recognised as part of the society, even on a minority level. The other type, lives in places like North Africa, Yemen, Iran or Turkey to name a few, where being a Muslim is the expected thing; the very few Christians there are perceived to be immigrants or from other dying out ethnical minorities. It feels lonely for new believers in such countries as they are not only disconnected from their wider context, but they also don’t have the fellowship of a community of believers to support them.

For both kinds of Christians, the arrival of SAT-7 in 1996 was revolutionary.  For the  first time a window was opened for them to connect with their neighbours and correct the many fallacies built around them, to be part of the public sphere and bring their contribution to the culture to the attention of their neighbours. For the other type of Christians, Christian media brought them the hope that they are not alone in this world; it was a source of hope for new believers in such societies to hear the Bible and Christian faith expressed in their own languages and dialects, to know that there are other believers and connect with them. SAT-7 has also equipped these believers with teaching and worship programs, helped them to start their own home churches, to grow in faith and fellowship. Today, after almost 25 years of the start of Christian satellite ministry withSAT-7, these new churches are producing new generations of believers and Christians that are becoming more and more confident to proclaim their faith to others.

In today’s world of COVID-19 lockdown, Christian media is becoming the source of worship and Christian education to many who are not able to attend churches or even hold home meetings due to the pandemic, yet they were able to celebrate Easter, worship and share with others through the different programs we present on our various platforms. Our aim is to continue equipping Christians of the region so that they continue to be a witness to others, stay relevant and connected so that faith becomes part of their culture, a motive for growth and better life.

Years of hardships and challenges taught MENA Christians endurance, we learned to be content even when there are troubles. This attitude is becoming a challenge in a global modern culture where we expect everything to be available, easy and clear. When we are hit by troubles, it becomes easier to question God or even ignore His presence; as if He is there to serve us, and when He fails to do so it is easy for us to dismiss. The Church in the East, and the culture in general, can inspire the more developed world of the West to understand the meaning of submitting to God, to remember we love Him  as a response to who He is.

For us in the East, expressing faith in the public sphere is something we long for and struggle with. It is a precious experience, so we have learned to work for it and value it. I pray this can inspire Christians in the West so they understand that which is taken for granted (to have churches open, freedom to express one’s faith etc) is so valuable, and that if we don’t work to understand the world around us and respond with that faith within us, faith can turn into a stranger even in countries that have long been  called “Christian”.

I read and follow some Western theologians and writers who mourn the loss of Christianity in the West, and blame the whole world for the hostility against God and the Church. I pray our model can inspire them to think again of how to re-introduce faith to their own people and culture, to think of today’s big questions and see how faith can present answers to them. It is a difficult, but interesting journey, one which I hope UK and Western Christians can understand the importance of taking with their brothers and sisters in the East. 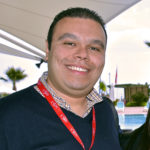 George Makeen is from Cairo, Egypt. His education includes a BA in Theology and an MA in Biblical Theology from The Evangelical Theological Seminary in Cairo. His previous work experience expands from script writing and translating to publishing and advertising. As SAT-7 grew to a network of five channels, George played a major role in the development and growth of that expansion. Now he is responsible for the programming of all SAT-7 Arabic channels.